How Do Photovoltaic Systems Work 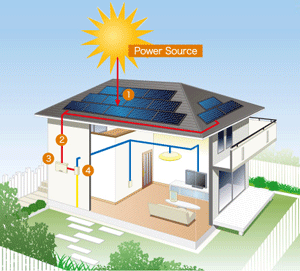 Electricity is produced from sunlight through a process called a photovoltaic system. Photovoltaic panels are typically made up of between 60 or 72 cells, each made of semi-conducting materials, which convert sunlight into electricity.

Solar cells are made of thin layers of silicon. When sunlight strikes a PV cell electrons within are knocked loose. The absorption of a photon (light particle) leads to a negative electron being shunted away from the silicon atom, leaving a positive ‘hole’. The free electron and the positive hole together are neutral. Therefore, to be able to generate electricity, the electron and the hole need to be separated from each other. This is done by giving layers within the cell opposite charges, so that the freed electrons cannot return to the positively charged holes and are instead attracted to the next layer. When the electrical contacts on the front and rear of the cells are connected through an external circuit, the freed electrons can only return to the positively charged holes by flowing through this circuit, thus causing electricity to flow. Greater intensities of light (i.e. more photons) give a greater flow of electricity.

What happens if the sun isn’t shining?

Even if the sky is overcast, PV panels still produce electricity. This is because PV panels not only use direct sunlight, but also diffuse solar radiation, which is light that has been scattered by dust and water particles in the atmosphere. Obviously the amount of useful electricity generated is proportional to the intensity of light energy that falls onto the panels, so less electricity is produced in overcast conditions, however, you can still have an electricity supply even without the sun!

Shading - do I have any, and how will it affect my systems performance?

A solar cell typically produces about half a volt when it is illuminated. Each solar panel generally contains 60 or 72 cells that are joined in series so their voltages add up to give a useful output voltage. In addition, PV systems contain a number of solar panels connected in series to produce an even greater voltage. A problem arises if just one of the cells is shaded because this results in an increase in resistance in that cell. The current from the other illuminated cells produces heat in this resistive cell which could irreparably damage it. To prevent this from happening, a bypass diode is placed in parallel with groups of cells. A diode is a simple electrical component that acts as a one-way valve, and if shading occurs within a group of cells it allows the current from other groups in the series to bypass the shaded group without causing damage. For a solar panel containing 3 bypass diodes, if one or more cells in a group is shaded sufficiently in comparison with the other cells then the output of the panel will be reduced by approximately one third. This can happen if just 1% of the panel’s area is shaded. If a long narrow shadow falls across the panel this could lead to all the bypass diodes operating and no energy being produced by the panel. Furthermore, if a shadow affects a number of panels then the overall output voltage can fall below the minimum operating input voltage of the inverter and the whole system will shut down. This can be avoided by using a micro-inverter for each panel, or minimised by installing Hybrid panels as these deal with shading much better than other panels.

PV panels contain no moving parts and have proved to be very reliable in the past. The majority of panels being installed now can be expected to be still working in 25 years. Their efficiency does drop as they age. For example, a study by the National Renewable Energy Laboratory in the USA found that a sample of commercially available solar cells lost an average of 0.71% of their output annually. The 28,672 solar panels owned by the Sacremento Municipal Utility lost 30% of their output over 25 years. However, the long-term performance of panels made 25 years ago may not be a good guide to the latest generation of panels. As well as being tested to be water and frost proof, PV panels are designed to work in much sunnier and hotter climates than in the UK. It is therefore reasonable to hope that the annual rates of deterioration will be less in the UK’s relatively mild climate. However, Panasonic (formally Sanyo) have run a performance analysis on one of their older 'H series' module systems. Ten years after installation in 1995, the entire system had only lost 3% efficiency; manufacturers will never guarantee this level of performance but choosing the right panel will maximise total profit / future potential. This system was installed in Japan which has a considerably higher average annual solar irradiation figure. They have also been tested for degradation by TUV Rheinland, this test resulted in only a loss of 8% over the term of the sequential test. This is tremendous achievement and will make this panel stand out over it's competitors.