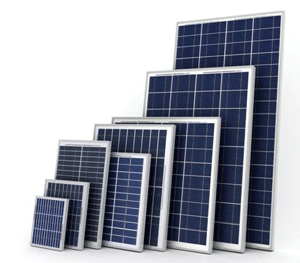 There are many different options available when looking for a solar PV system. From panels, inverters & mounting systems, to fully optimised systems or even a bespoke ground mount array.

Solar cells are made of thin layers of silicon. When sunlight strikes a PV cell electrons within are knocked loose. The absorption of a photon (light particle) leads to a negative electron being shunted away from the silicon atom, leaving a positive ‘hole’.

An amorphous solar cell is a type of solar cell that is relatively cheap to produce and widely available. They are named so because of their composition at the microscopic scale. Amorphous means "without shape" which means that the silicon material that makes up the cell is not highly structured or crystalized. Amorphous solar cells are usually created by applying doped silicon material to the back of a plate of glass. The cells usually appear dark brown on the sun-facing side and silvery on the conductive side. When produced as a solar panel (a collection of many solar cells) it will appear to have several thin parallel lines running across its surface. These thin lines are actually breaks in the N and P layers of the silicon substrate and they create the boundaries of individual cells in the panel. Thin film panels are excellent at converting low-light conditions into electricity, however they are not efficient at converting direct sunlight. A large surface area is required to other panels, making these more viable for commercial projects.

Polycrystalline silicon, or multicrystalline silicon, (poly-Si or mc-Si): made from cast square ingots — large blocks of molten silicon carefully cooled and solidified.
Poly-Si cells are more expensive to produce than Amorphous cells but less expensive than single crystal silicon cells.
The durability and longevity, however, are comparable to their monocrystalline cousins and these are still a very common panel used in domestic applications today.

Monocrystalline silicon (c-Si): Single-crystal wafer cells tend to be expensive, and because they are cut from cylindrical ingots, do not completely cover a square solar cell module without a substantial waste of refined silicon. Hence most c-Si panels have uncovered gaps at the four corners of the cells.
Although monocrystalline cells are currently the most efficient at converting direct sunlight; for a given system size, low-light and direct sunlight outputs are comparable that of a polycrystalline system. However the area required would be considerably less due to their higher efficiency.

Hybrid (Monocrystalline & Amorphous) - up to 19% efficient

For a given system size, Hybrid panels will generate approximately 30% per annum more than its predecessors. This is mainly due to their impressive output in low-light conditions, but their high temperature resilience also contributes to the overall advantage. 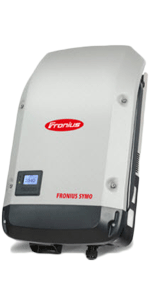 Maximum power point tracking (MPPT) inverters are the most common because they are a cost effective option. MPPT is a technique that inverters use to maximise generation from a string of photovoltaic (PV) modules.
The output from a string of panels (panels wired together in series, like a Christmas tree) will have varying Voltage and Amperage depending on light levels and cell temperature.
If an inverter only has one MPPT, then it will only be capable of maximising generation from one string of panels. If there is a little bit of shading or if panels are installed on two different roof pitches (facing different directions) then two or more MPP trackers will be required. Strings get hampered when shade is cast across a panels surface, this hampers the flow of electricity and reduces the efficiency of the string, if there is a panel failure then the string will switch off as the flow of electricity is cut. 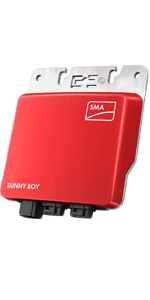 Micro-inverters have several advantages over conventional inverters. The main advantage is that small amounts of shading, debris or snow lines on any one solar module, or even a complete module failure, do not disproportionately reduce the output of the entire array.
Each micro-inverter harvests optimum power by performing maximum power point tracking for its connected module. Simplicity in system design, simplified stock management, and added safety are other factors introduced with the micro-inverter solution.
The primary disadvantages of a micro-inverter include a higher initial equipment cost per peak watt than the equivalent power of a central inverter, and increased installation time since each inverter needs to be installed adjacent to a panel. 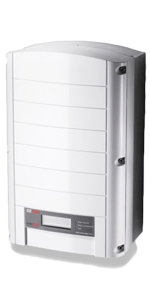 Optimised inverters are wired in a similar way to standard tracker inverters but with one crucial difference The SolarEdge power optimiser is a DC/DC converter which is connected by installers to each PV module or embedded by module manufacturers. The SolarEdge power optimisers increase energy output from PV systems by constantly tracking the maximum power point (MPPT) of each module individually. Furthermore, the power optimisers monitor the performance of each module and communicate performance data to the SolarEdge monitoring portal for enhanced, cost-effective module-level maintenance. Each power optimiser is equipped with the unique SafeDC™ feature which automatically shuts down modules' DC voltage whenever the inverter or grid power is shut down. The MPPT per module allows for flexible installation design with multiple orientations, tilts and module types in the same string. When working with SolarEdge Inverters, SolarEdge power optimizers automatically maintain a fixed string voltage, allowing installers even greater flexibility with longer strings and strings of different lengths in order to design optimal PV systems. Alternatively, the new independent optimization (IndOP™) technology allows power optimizers to be installed without the need for additional interface hardware and to operate directly with any inverter.

The SolarEdge power optimizers are compatible with c-Si and thin-film modules and have a 25 year warranty. The SolarEdge DC-AC PV inverter is specifically designed to work with the SolarEdge power optimisers. Because MPPT and voltage management are handled separately for each module by the power optimizer, the inverter is only responsible for DC to AC inversion. Consequently, it is a less complicated, more cost effective, more reliable solar inverter with a standard 12 year warranty, extendable to 20 or 25 years. The fixed string voltage ensures operation at the highest efficiency at all times (>97% weighted efficiency) independent of string length and temperature. 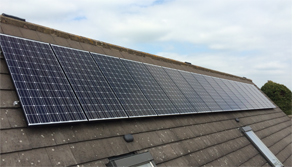 The term "on-roof" is used to describe when a solar pv panels are held on to the roof using roof anchors attached to the roof rafters or trusses, with rails connected to the brackets, usually an inch or two higher than the existing roof tiles or covering. One important note for any on-roof installation is to ensure that each tile that sits above a roof anchor bracket has been "notched out", in order for the tile to sit back down properly on the tile below and not on the roof bracket. If the underside of these tiles is not ground out to sit comfortably around the mounting bracket, or the brackets are set to close to the tile below then either tile can be highly likely to crack and fall down during high winds. 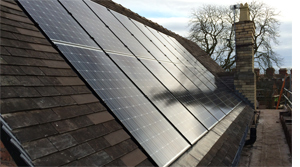 As the name suggests, "in-roof" systems sit a lot lower down in the roof and even on flat slate roofs they hide away beautifully. They are ideal for conservation areas for their looks, cost effective on new builds by "off setting" material costs and improving your homes EPC score. After removing the existing slates or tiles (if applicable), additional roofing battens are added and screwed down firmly. Mounting plates are then fitted directly to the top of the battens, and secured down. Next flashings are then added to all sides of the array, and tiled over. Finally the solar panels are fitted to the mounting plates. 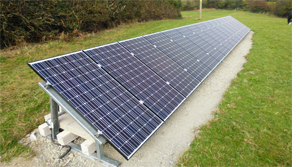 A fantastic way to generate your own power if you don't want to put anything on your house, and you have a small area of land not used in a garden or field. Easy to install on a small patch of land out of the way, and preserves the looks of your property. We can also bespoke design timber framed arrays for vegetable gardens, or even fit panels to existing pergola structures etc..